My wife and I were invited to the Haliburton Rotary Club meeting last night.  I was told, weeks ago, that it was to thank some people who have supported the club.  Nice gesture.  When we arrived my two best friends, both from Hamilton, were in the lobby.

“What on earth are you doing here”, I asked.  Turns out, my dear friend, Bob Morrow was the guest speaker.  “Wow, imagine that, I get invited as a guest and you are guest speaker.  Talk about serendipity.”

Bob has a great presentation on the Canadian Space Agency and a science program that runs in public schools to generate interest in a range of sciences, technology and the space agency.  His speech was excellent and people had a great time.

Just before Bob spoke, one of the Rotarians talked about the Paul Harris Fellowship, and then another member started to talk about me.  “What?  Why are they talking about me?  We’re here to hear Bob.”  Well, turns out The Rotary Club of Haliburton had decided to  honour me with a Paul Harris Fellowship Award.  This is one of the highest honours in Rotary.  Named after the founder of Rotary, it is given to members or citizens who have contributed to their communities. 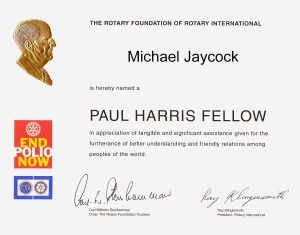 I know how much this means in Rotary.  I thank them for their kindness and this honour.

It turns out, Bob and Ray came north to see me get the award, and Bob offered to do the keynote speech.  Plus, the guys stayed overnight at our house, came into CanoeFM in the morning and then we had a leisurely breakfast together at the famed Kozy Korner.

One thought on “Gobsmacked, but good.”