Early on during my stint at CKOC I was primarily in the news room.  I did some DJ work on weekends but there were no openings for a permanent on air shift.  One of my assignments in those early months was to interview the prime minister, who would be visiting Hamilton, regarding an announcement he would be making.  The Prime Minister was John Diefenbaker.  It was an exclusive opportunity. 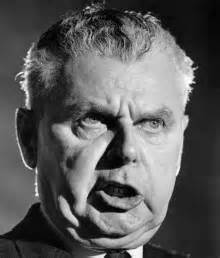 The invitation to interview the PM was brought to the station manager, Bill Cranston, by a close acquaintance of his, the Right Honourable Ellen Fairclough.

Ellen was a well respected member of parliament, representing Hamilton West and she was the first woman to become a member of cabinet as Minister of Citizenship and Immigration and later as Postmaster General.  She was a woman of power with a commanding presence that was nicely tempered by the kindness that she often exhibited.

I was very intimidated at the thought of meeting Ms. Fairclough, never mind the PM.

I was to meet the PM in a suite at the Royal Connaught Hotel in downtown Hamilton.  It was still THE place to stay in those days.

The Royal Connaught Hotel is a 13-storey building s built by Harry Frost of Buffalo, New York in 1914 .

When it was complete the building cost $1,000,000, a huge sum in those day.  It’s interesting how the hotel got its name … through a contest. Alfie Richards, a  school student, won the $10 gold piece prize by suggesting the name Connaught after Canada’s Governor General, Prince Arthur William Patrick Albert, 1st Duke of Connaught and Strathearn. In 1914 the Duke of Connaught laid the cornerstone, and granted 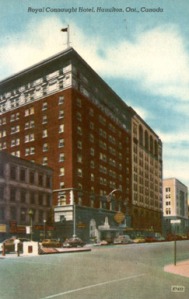 permission to add “Royal” to the name of the hotel.  What a swell guy.

The hotel opened in 1916 with tours for the general public, an opening reception, and a lavish banquet and dance.

Even CKOC called it home for a period of time.  In 1927, CKOC  was finding its  accommodations in the nearby Lister Building unsatisfactory and the radio station moved into the 11th floor of the Hotel. The transmitter power was raised from 50 to 100 watts. Big for its time, but almost humorous by today’s standards.

Back to the story.

I was told to get my butt up to the hotel and go with Ralphie Binns, an engineer, who would look after the tape recorder while I was talking to the PM.  The appointment was for 2 pm so that we could get it on the air for the 4 pm news.

Away we went, on this warm summer day, uptown to the hotel.  We parked the car and went up to the 11th floor of the hotel.  The old elevator shook and quaked as we ascended.  I was glad to have the time to gather my thoughts and try to calm my nerves.  This was a big deal for a 20 year old.

When we arrived at the room, it turned out to be a suite.  A very impressive, stately looking  sitting room with two rooms off that main room.  We were met by an assistant to the PM who introduced us to Ellen Fairclough.  Ellen reminded us that this was an exclusive opportunity for the station and that we should be very direct with the PM so as not to take too much of his time.

Out of one of the bedrooms came John George Diefenbaker, the 13th prime minister of Canada.  Jowls a swinging, he entered the room talking to others in attendance, totally ignoring us.  That, in itself, was very unnerving.  We didn’t exist until he indicated we did.  After he got some business of the day out of the way, he turned his steely gaze to Ralphie and yours truly.  With a smile, obviously taking notice of our state of awe, he asked us who we were and inquired if “this” would take long.  No I said, it would only take a few minutes.

Ralphie had already set up the tape recorder.  Now, when I say tape recorder, you’re probably thinking of some really cool portable device that a radio station might have in those days.  Uh Uh.  Believe it or not, the tape recorder was a wind-up model, that had a big crank handle on one side.  It was a pretty ugly, unimpressive piece of technology, if I can call it that.

Be that as it may, Ralphie was all set, I had the approved questions to ask the PM and the PM was anxious to get it over with.

The interview went fine, and I was very pleased with my own performance.  I’m sure the PM and Ellen Fairclough had met many who were far more experienced and professional but they were kind enough to be warm and generous in their comments.  We thanked the PM for his time and started for the door.

Ellen said that she and the PM would be listening for the 4 PM news.

Wow.  I left the hotel feeling quite elated that I had actually interviewed the prime minister of Canada and met Ellen Fairclough.  I was in a new league of radio reporters.  I was on my way.  Wow.

We got back to the station and in the production studio our GM, Bill Cranston, our program director, Jack Hill and the production engineer John Paro were waiting for us.  Ralphie handed over the portable recorder and John Paro removed the reel-to-reel tape, moving it over the his big studio recorder for editing.

I waited with great anticipation.  In moments I would hear the results of my handiwork.  John set the machine and play and the brown 1/4″ tape started to move through the playback heads.  Here it comes.  Here it comes.  Seconds went by, then more seconds.

Nothing.  No.  Nothing.  The entire tape was blank.  Ralphie had forgotten to push the record button.  For about a minute there was a terrible frost in the air.

Bill Cranston broke the suspense by exploding with “and what the hell am I supposed to say the Ellen and the PM when they don’t hear the report at 4 PM.  That we have incompetents on staff?”  Hey, that’s not fair, I said inside my head, I did my part … shoot Ralphie.  After some considerable time constructing a story that might sound plausible, Bill went back to his office to call Ellen and tell them that they needn’t listen at 4 pm.

I was not in a new league of radio reporters, and I definitely was not on my way.  I felt lucky to retain my job, escaping the wrath of Bill Cranston.  I was still employed.  Ralphie was not so lucky.  He was sent on his way to find his career at some other radio station.  It was not Ralphie’s first transgression but it was certainly his best.  I can only hope that Ralphie had a great career and that, now in his retirement, he has a very funny story to tell his grandchildren about the time the PM of Canada was not amused!

4 thoughts on “Radio Story #5: The Prime Minister was not amused.”